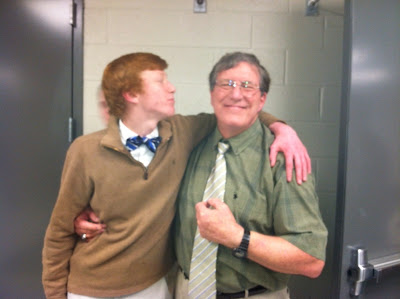 I love this picture, for so many reasons.  This is my oldest son with his wrestling coach.  This picture was taken at the sports banquet.  My son graduates in June.  I'm having lots of issues with this whole "growing up" thing.

When my son first started wrestling his freshman year, he was maybe 5'3" and weighed all of 103 pounds.  Coach was huge compared to my boy and he dubbed my son PeeWee.  Everyone on the wrestling team is allowed to call him that, but not his parents.  Now look at them. At 6'2" he's not so PeeWee any more.  But he still admires and respects his coach.  They really do have an amazing relationship.

After the banquet, Coach came up to me and told me how much he "loves that boy" of mine.  What I love is watching them together...the humor, the respect, the friendship and the possible glimpses of the man my son will become.

This man has been coaching at the same high school since 1979.  He was there when my sister and I went there.  He's retired twice and keeps coming back. He takes his responsibilities very seriously.  He loves those kids and I was so glad he was there for my boy....I wonder if he wants to go to college with him....It would make this Mama feel better.