I hope everyone is well.  The comments from yesterday's post were great...however, I must say I started feeling my age when Hannah had to ask her mother who Hall and Oates were....OUCH! I'm guessing her mother and I are about the same age since Hall and Oates were really popular when I was in High School.  And then Courtney, who was in High School in the 90's...Yikes!  I was having babies in the 90's. And Rachel roller skating to Boy George....Sigh....It made me feel a little cantankerous and old...but that's OK because there were several of you...Karen, Tracey and Steph that are right there with me...I guess we listen to the "classics." According to my "scientific research,"  it appears that 80's and 90's music is going over well with the younger generation in Kelly's and Anne's homes...I say introduce them to some Zepplin, man! Although I'm not sure some of the lyrics are age appropriate...."Hey, Hey Mama, said the way you move, gonna make you sweat, gonna make you groove....." Yeah, umm, maybe not...Moving on.....

So this morning has been an exercise in frustration.  It took FOREVER to get my pictures to download...and then they aren't even good ones...sigh...here they are in all the over exposed and under exposed glory.... 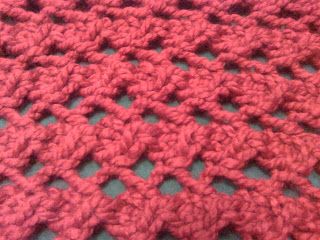 This is something I've been working on...it's actually finished, but it's for someone, so I can't tell you what it is or who it's for....shhh...it's a surprise.  It's only my second attempt at knitting lace (sort of lace) and I think I'm starting to get addicted to it. There is definitely a bit of satisfaction to watch it unfold.  This worked up quickly because I used thick yarn and large needles.  Hopefully I'll be able to post a picture of it on the recipient soon.  We'll see.  Some people are a little camera/blog shy. 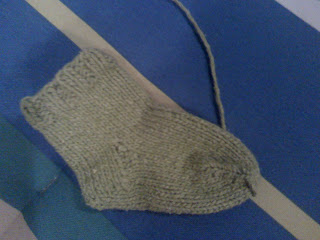 This is another bit of frustration for me.  It's a baby sock and it's adorable...although I do need to work on my grafting (more frustration).  I love baby socks and I have a friend that wants to sell some in her store, but I just can't seem to find a way to make it cost effective.  They take way too much time to put on the shelf for just a few dollars, so I have to ask what you think a reasonable price would be...we'll make it all official and call it "market research." I also need to find a way that doesn't take me all evening to make one sock....which takes me back to my crappy grafting.  I think I need to find an easier way to close the toe...or maybe try toe up socks? Are they very hard? Any suggests would be great.

Well I'm off to find my rocking chair.  After yesterday, I'm feeling a bit old and I think a nap might be in order.  Take care!
Posted by Melissa at 11:31 AM