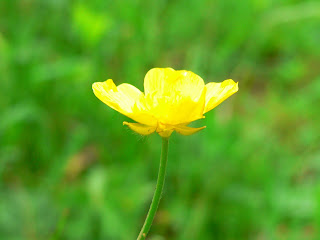 What do May Flowers Bring?  Pilgrims....Sorry it's an old, bad joke, but the rain is coming down in torrents here in the south, with the occasional boom of thunder and I just couldn't resist.

Ladies, I must thank you for your help!  I do love my friend and I don't mind making the random baby blanket or hat for her store, but I broke the news to her last night that there would be no socks.  And bless her, once I explained, she was good with that.  I have some bootie patterns that she likes, so I'll continue making those when she needs them.

We haven't had a Car Guy update in a while and so I thought it was about time to let you know what's going on with his "baby."  I only say this because I was with some friends last night and was asked where he was and my reply was "under the Porsche."  Which I quickly had to follow with "and I didn't put him there" after I received several odd looks.  Just a quick catch up...Car Guy is restoring a 1972 Porsche 914.  He's doing all the work himself, so this isn't a quick process. 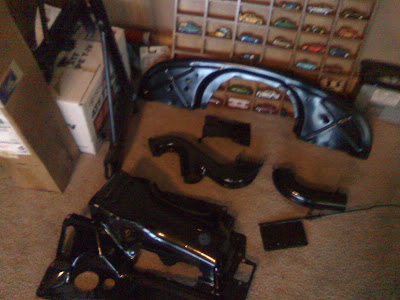 I am happy to say that these car parts aren't on the floor in my den....I don't think...either that, or I've become so immune to them that I don't even notice any more...anyway, they are now out in the garage where they belong...except for the headlights sitting on the desk. Those are too fragile to reside out there where they might get broken. I've been told they are crazy expensive to replace...I'll trust him on that one. 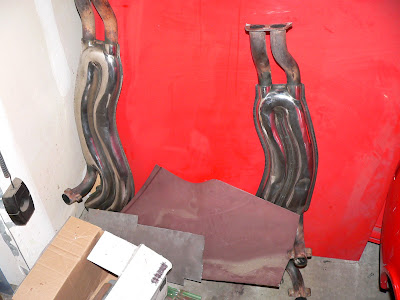 I kind of wish I had a before pictures of these.  They are all pretty and shiny now...I sound like such a girl. 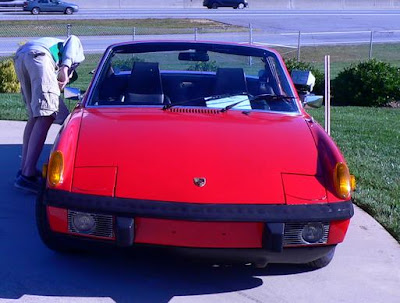 This is the car before he started the restoration...not to shabby if I do say so myself. I know you are thinking that she really doesn't look like she needs a lot of work. 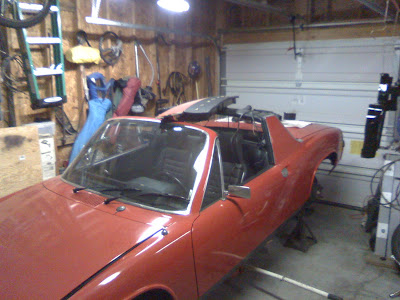 Here she is back in July.  The tear down had begun. 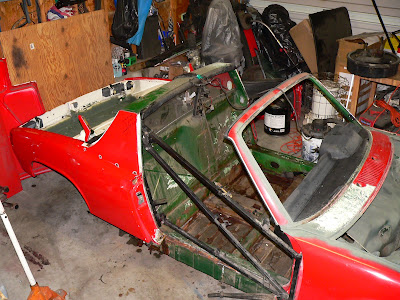 Here she is now.  See that green?  That's her original color. We are going back to that color. No more roots, just glorious green.

Now what I'm about to show you is a tad bit scary....for me anyway. You are about to see exactly why she needs a full restoration... 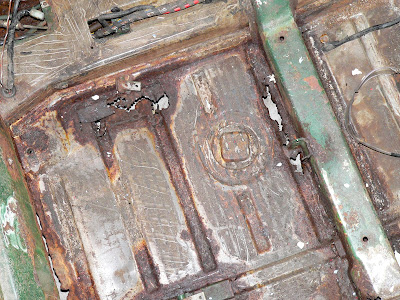 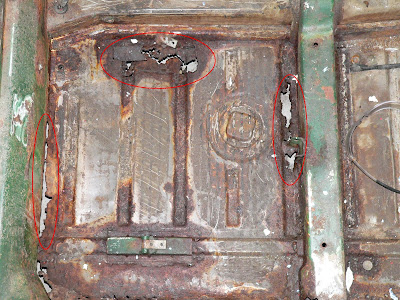 Do you see the red circles?  Those are actual holes that I can fit my fingers through.

Now I know you are asking what's the big deal...It's an old car and rust is bound to happen and it's fixable.  Yes it is.  Here's the scary part.  That's the floor board on the passenger side of the car underneath the seat. That was where my behind was planted on a regular basis, people. And if we are going to be painfully honest here (you know, full disclosure and all that) my behind is not that of a young, 120 pound waif.  No sirree, it belongs to a full figured gal that has birth two strapping boys.  It kind of freaked me out a bit.

You know, I often said that I felt like my rear end was dragging the ground when I rode in that car....now I know why.