Stalker...Lurker...Lazy...Confession is Good for the Soul

Ahem...I have a confession.  It's rather embarrassing.  I'm a Ravelry stalker. AND...*deep cleansing sigh*....I'm a blog lurker.  Oh my.  That does feel a little better. Now let me explain...I hope.

I love Ravelry.  It's a major time suck in my life.  If I could step away from Ravelry (and Pinterst), I'd get a lot more done.  But there are so many beautiful things to look at! I mean I only have 970 favorites.  Everybody needs at least 500 favorites, right?  Well, here's the embarrassing part...I like to look at other people...and I don't necessarily friend you.  I'll look at your projects, your favorites, your queue...I might even look at your friends....all said while hanging my head in shame.  I tell myself that I do this for inspiration, but truth be told, I'm just plain nosy.

I'm also a lurker.  There are some blogs that I've been visiting for over a year that I'm just now starting to comment on....so if you wonder who this random person is that pops in and sounds like they know way too much about you....that would be me.  I know about your life because I've been poking my big ol' nose into it with every post.

It all sounds a little creepy doesn't it?  And that's the thing.  I don't comment and I don't friend because I don't want to be that creepy random person that just showed up....which is exactly what I've become...you know the one...."Who is this?" Yup...it's just little ol' me.  The crazy woman over there on blogger.  No biggie. I promise I won't show up at your house unless I'm invited....except for maybe yours Dawn...and Mel...and Anne :) 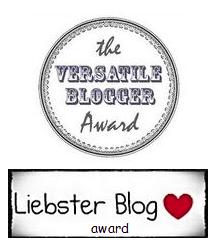 And finally, it was brought to my attention that I've been a bit lazy. No one actually pointed it out to me by telling me, but it was an event that led me to the realization.

You see, yesterday Kelly over at Who Matters was kind enough to award me with the Liebster Blog award....a very sweet thing to do.  Which reminded me that Anne over at Writing by Numbers awarded me the Versatile Blogger Award....back in March....over a month ago!  I had every intention of saying something, but things happened...time got away from me...blah, blah, blah, blah, blah. You get the picture. So here's the deal...I'm supposed to tell you seven things about me and I'm supposed to give these awards to other people. You already know three things about me...I'm a stalker, a lurker and I'm lazy...not a very flattering picture, but I'm just keeping it real. You'll get more about me in a minute.  Here's another lazy, keeping it real moment...Here is a list of the blogs I read on a regular basis.  I love them...I actually comment on some of them.  Rather than giving them an award, I'm telling you to go pop in and visit....say hi...learn something....leave a comment....give it a shot....it won't hurt...I promise....

And oh my dear, there are so many more!  Tons more!  This leads to learning something else about me....I spend way too much time on the Internet...I mean WAY TOO MUCH time.  But you will notice a recurring theme with these blogs....Women, Families, Yarn and Food...some very important things in my life.  OK, now onto other things about me.

- I totally suck at this social networking thing that's going on online.  I have facebook, google+ and twitter and I very rarely tweet or update my statuses.  I think I have maybe 5 friends on google+.  I have plenty of friends on facebook and I kind of stalk people there too.  I check in and see what they are doing, check out their pics and every once in a while leave comment...but not often.  Update:  Just an FYI....If you stalk me on Ravelry, I'm just as bad at updating that as I am everything else...Sorry!  It's kind of boring!

- I want a farm....most of you who have been around for a while know this about me and know that I am totally coveting those farms of yours out there. I don't want anything huge, just a little sustainable farm. Something that makes me a producer of my own instead of a consumer of others....It's a dream.

- I wish I had been a "Stay at Home Mom."  There are times when the doubts creep in and I feel like I didn't do every thing I should have as a working mom.  And I feel like I let my boys down...and I did.  We all make mistakes and let each other down.  I just have to make sure I don't beat myself up over it...a lot easier said than done.

- I wanted more children....but I would have had to of been a "Stay at Home Mom" in order to do it properly...for me...no judgement here people!  I admire women who can do it all and I am woman enough to recognize that I can't. Back to the children thing...I did pregnancy really well and I love children and would have had more at least two more.  Things being what they are, I'm happy with my two and I spoil my 4 nieces and 3 nephews as often as I can...don't worry, I spoil mine too.

With everything I've just said about myself, I've realize that I'm a very old fashioned kind of gal. I'm good with that.  So there you go....I'm an old fashioned, lazy, lurking stalker....do they have a twelve step program for this?