The mail...we all get it.  Mostly it looks a little something like this... 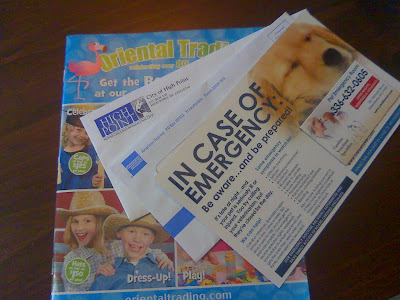 A collection of bills, sales flyers, the occasional magazine, etc. Nothing particularly exciting.  When I was a child, I loved getting the mail...just to see if there was anything in there for me.  I had a grandmother that was wonderful about sending me little notes in the mail.  She was my first pen pal.  When I was too small to read them, my Sainted Mother would read her notes to me.  Then, as I got older we'd write to each other fairly regularly, even though she only live 45 minutes away. I had a couple of other pen pals over the years and then there were the letters from my "first love" when I was thirteen.  I remember the excitement of opening that metal door and flipping through it all until I saw the envelope with my name on it.

When I eventually became an adult, the mail kind of lost it's luster for me.  Most of my friends and I email or talk on the phone, so the mail became something that I didn't really enjoy. It was mostly junk mail and bills...basically someone asking for the money that I felt like I didn't have.  Until now.   After months of waiting, Number One Son got a couple of large envelopes, one from Charlotte and one from Greenville ...news we'd all been anxiously waiting for.... 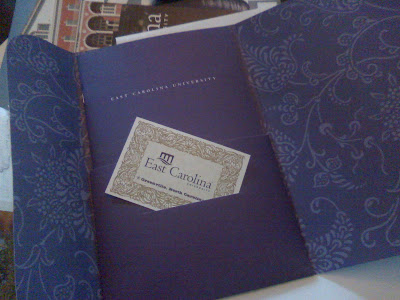 In the fall, my oldest will became an East Carolina University Pirate...that makes this Mama VERY proud and so excited for him and the opportunities this will bring him. And the bonus? Last Friday, I fell in love with the mail all over again...until that first tuition bill comes...Yikes!