How is everyone?  I hope you all had a wonderful weekend and aren't having any trouble of getting into the groove of the week.  I've been practicing my spinning and there are good moments and not so good moments...just like with any new endeavor.  I have realized that if I'm particularly tired or irritated, I need to stay away because all I end up doing is further frustrating myself.

Because I can't keep Natalie's wheel that she so generously loaned me forever, Car Guy and I have been combing through Craig's List and EBay to see what we could find.  We actually found a wheel fairly close by and after a lengthy email conversation with the seller, we went an hour and a half away to look at it.  Success!  Here it is.... 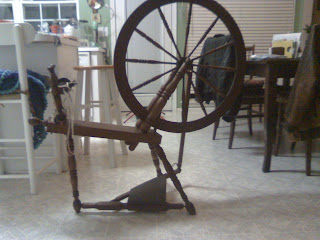 Isn't she pretty?  I'm such a dork, that I've already named her...Esmeralda.  It suits her, don't you think?  By the way, I have a long history of naming things, cars, machines, whatever.  She needs a little work, but for the cost, she's well worth it.  However, there are some members of the household that aren't too sure about her. 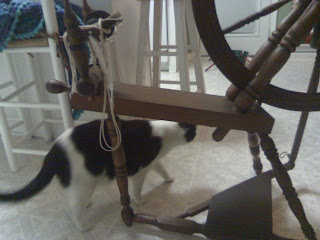 Oreo had to check her out...give her a good sniff and look over. 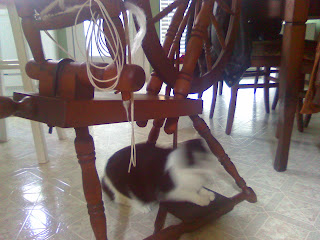 He thought it might be a cool place to sit....until she moved on him.  I wish I had gotten a few more pictures, but once the treadle moved, he was out of there. I guess he's not destined to be a spinner.
Posted by Melissa at 1:07 PM