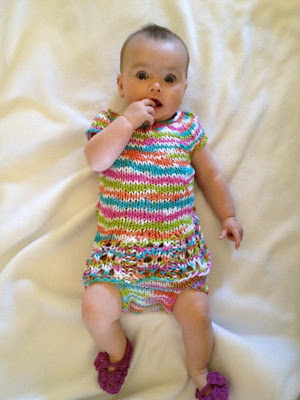 Oh dear....isn't she the cutest? There is absolutely nothing mundane about my adorable niece Piper...And how about the rainbow bright outfit?  Nothing mundane about that either, if I do say so myself.  I made that little outfit for her for Christmas...not that she really cares.  She's a baby. It's just something to keep her covered and warm.  Not much else. In fact, I bet if she had things her way, she wouldn't have anything on at all because, let's face it, babies do love to be naked. So to her, it's very mundane.  This type of thing doesn't take on any importance until we're older and other people teach us the importance of our appearance and "being cute."  And at some point, she might even look at that picture and think "What in the world was my mother thinking, putting that outfit on me...I look like a deranged fairy,."  But later...when she's older...maybe when she's pregnant with her own child...she'll hold this little outfit in her hands and remember the crazy aunt that made it for her and then she'll remember other things - Like the hugs and kisses; the family beach trips; the loud, older cousins that adored her; and possibly so much more.  And then, suddenly that outfit won't seem so crazy or mundane and maybe she'll even put it on her little girl and carry the love forward...Just a little family magic.
Posted by Melissa at 2:27 PM