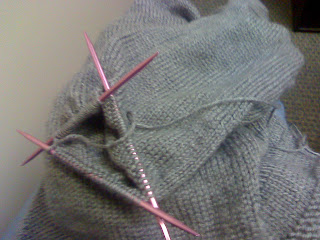 Well, not really.  But it has grown an arm...sort of. Do you know how difficult it is to photograph a grey sweater? Not that this is the greatest picture. I'm about three quarters done with the first sleeve of my cardigan.  I feel like I'm at that point where I keep knitting around and around and it doesn't seem to be getting any longer. I'm beginning to think that knitting garments is not my strong suit...can you say no patience?

Not that I've been working on it religiously.  Most of the sleeve was done while sitting in the waiting room Sunday evening waiting on Car Guy to get checked out by the doctor. Please tell me how a 49 (almost 50) year old man manages to get a raging case of pink eye in BOTH eyes?  The kids didn't bring it home.  Nobody else has it.  Just him...and he was miserable all weekend.  He was like a vampire sitting in the dark because even the smallest bit of light hurt his eyes.  He was given some antibiotic ointment for this and is much better. Needless to say there has been a great deal of hand washing going on in our house.

I did complete one thing this weekend...actually three things.  I was sucked in and I finally read all three of the Hunger Games Series. I have to admit, it was a little more gritty than I expected.  Obviously, I enjoyed them because I started reading The Hunger Games Thursday evening and finished Mockingjay last night. Since I was relegated to the dark all weekend, I was able to read them all on my iPad without disturbing the pathetic old man that Car Guy became....OK, so I didn't read them all in one weekend, but close enough.  For some crazy reason the people in my house expected me to stop reading and fix them food....Excuse me? 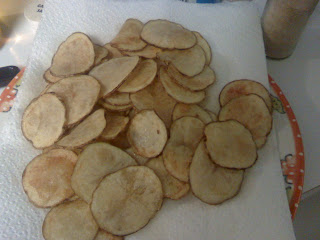 Speaking of food....just another one of my clever little segues...I have been having this horrible craving for homemade potato chips. Don't they look terrible?  So easy and so bad.  Especially with a little garlic salt thrown on there.  I just had to put that out there so that everyone else will be craving them for the rest of the day with me because those bad boys on that plate are long gone...but they were so good.

OK.  I'm off to find a substitute for those chips - hopefully something a little healthier.  Dinner with the Biscuits tonight.  Should be fun. Have a good one!
Posted by Melissa at 10:34 AM