It's been a couple of weeks since I've done a Magic of the Mundane post.  It's not that I haven't seen it, it's that I've seen so many little moments of it everywhere...the excitement in one college student's face at the new adventure ahead, the hug between brothers as they say good bye, the love and pride in a father's face as he let's go.  All these things fill me with joy and wonder.  But these are momentous moments too.  Then this weekend I had a lovely moment...almost all weekend long. 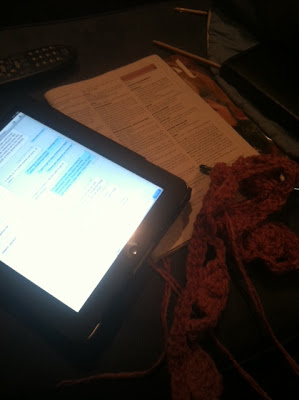 My older sister lives on the west coast...California to be more specific.  She moved out there about 14 years ago.  I miss my sister a lot.  We are so different, yet so similar.  We understand each other...most of the time ;)  My sister has been a knitter for years.  I have several scarves she's made me over the years.  I love them and wear them regularly every winter.  My sister decided that she wanted to learn how to crochet.  She bought a magazine or two and found a pattern she really liked. It's an "easy pattern" and as she's learned the basics, she decided to give it a go....and proceeded to get VERY frustrated...as in ARGH!  frustrated.  So we used FaceTime, texting, videos and emails and my sister is now crocheting her poncho.  It was so wonderful that we were able to do this.  I was able to help my big sister learn something new all the away on the other side of the country. It made me remember how much fun we used to have and it was neat to be able to do it again.  It was different but the same, but always special.
Posted by Melissa at 7:00 AM