I have to say, everything went beautifully last week moving Number One Son into the dorm.  We drove down Wednesday night, stayed in a hotel and then moved him in Thursday morning. We were done by lunch. Compared to a lot of people, my dear boy was a light packer - thank you! He's on the third floor, so we were able to use the stairs and had everything in the room in two trips! 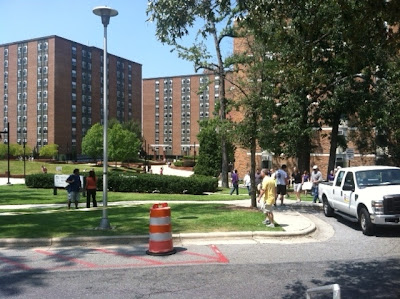 That building in the center is his dorm. 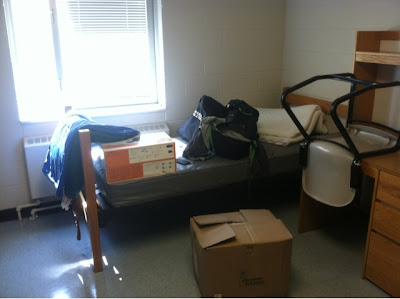 There is his desk and bed.  So....institutional.
Nothing like cinder block walls and linoleum to make you feel at home. 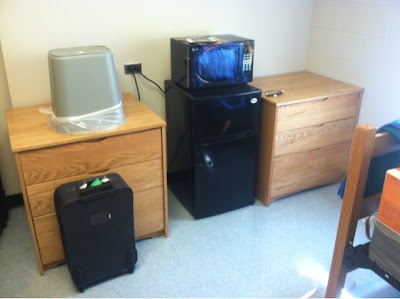 So much has changed since I was in college.  There is A/C in every room and a refrigerator and microwave. We didn't have A/C in the dorm I was in and microwaves were forbidden...the wiring was so old in my dorm it probably would have fried the whole building. 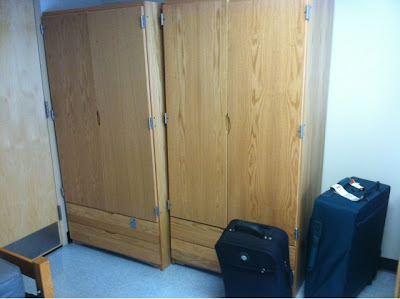 Thank goodness he's a boy.  He only gets one of those wardrobes for his clothes...that and one of the little three drawer dressers. Not nearly enough room for a girl - boy did they have a lot of stuff! He lives in a coed dorm with split halls.  Down one end of the hall is the girls and the other end is the boys with the stairs and elevator in the middle.  When I was in college, they had just started coed dorms on my campus and it was girls on one floor and boys on another and after a particular hour, the two did not mix. 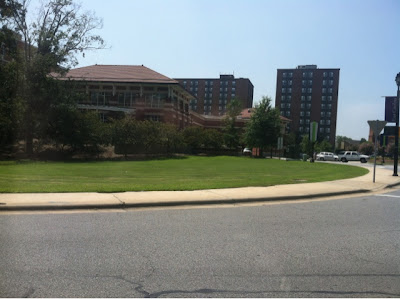 That building up there is where he will be getting most of his meals now.
He hasn't complained about the food yet, so it must not be all bad.

I've tried to respect his privacy with this post since he is moving into a more adult world, I think it's only fair that I not post his personal space.  That's why there are no pictures of his room put together or of his room mate, etc. I've had a few text conversations with him and had my first phone conversation with this morning. He appears to be adjusting beautifully.  Mama is getting there slowly.  The house is very quiet.

On top of Number One Son leaving, Car Guy will be gone for the next two weeks on business. He will come home for two days and then has to leave again.  Thank goodness I still have Number Two Son around.  He's been very sweet. We have a sushi date Tuesday evening and he and his friends have been hanging around our house. I love having them there. Even when they get a little loud, it's wonderful.

I also have plans to do things with my girlfriends.  There is girls' night Wednesday and *gasp* I may go to the gym on Thursday...not that I'm a member...yet.  We'll see.  Everything is happening one day at a time.

Thank you again for all your love and support, kind words and for just being there.  I really can't tell you how much that means to me.  I never have to look far to know that someone is offering a smile and virtual hug. It's a very special thing that means the world to me. It has made this adjustment so much easier!
Posted by Melissa at 11:06 AM