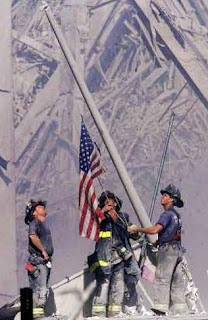 If you watched any TV this past weekend, you were reminded of the terrible events of 9/11, since we just passed the 10th anniversary.  I've gone round and round about whether or not I was going to post anything about it or not and as difficult as this experience is to revisit, I've decided to share my experience-just a little later than everyone else - for two reasons, my sons.

I was getting ready for work that morning and happened to have the news on.  I didn't have to be in until 9:30, so I was taking my time.  I wasn't really paying a lot of attention.  I just remember hearing Julie Chin saying something about a plane crashing into the first tower.  My first thought was what was wrong with the pilot - was he/she stupid or ill.  My second thought was why on earth was the plane anywhere near the tower? I remember just thinking that it was going to be a mess and I hope everyone was OK.  I was distracted and running through my head what I needed to do before I left for work. I was literally putting on my shoe when the plane hit the second tower. I distinctly remember sitting down on my bed, my shoe in my hands, thinking that this was not good.  I had a bad feeling in the pit of my stomach. I just sat there stunned. After a few minutes, I put on my shoe, grabbed the portable radio and head out the door.  I backed my car into the neighbor's driveway and ran up, knocked on the door and asked Dorothy if she was watching. She said she was.  I told her to keep me posted and drove to work. While I was on the way, I kept trying to get in touch with Car Guy.  At the time, he worked in a call center and didn't have access to the news. I finally got hold on him and he didn't believe me at first.  He said that it was just so far fetched.

When I got the work, I was late. I was ready with my apologies, but since there were just three of us in the office it wasn't really any issue.  Jim was just glad I'd brought a radio since we didn't have a TV or radio there. It was a small one attorney office and we sat in the reception area listening as everything unfolded before us.  We were totally shocked.  I think we were all a little numb as none of us was talking. When the first tower collapsed, all three of our cell phones rang with updates from our family/friends. We spoke quietly and quickly on our phones and hung up so that we could continue to listen.  When the second tower fell, Jim walked into the conference room and stood quietly, looking out the window for a moment.  He then turned around, looked at me and Debbie and told us to go home, he was closing the office and we needed to be with our families.

I think that was the weirdest and eeriest drive home I've ever had.  No one was on the roads.  I was driving down a highway and I only passed the occasional car, most of which were law enforcement vehicles.  The other weird thing was the air traffic. All planes had been ordered to land and we live near a major airport so planes were landing one right after the other - all different sizes and descriptions. I remember getting home and feeling a certain amount of relief just because I was home, but I didn't feel safe.  I'd been trying through out the morning to get in touch with various members of my family.  My Sainted Mother was in Florida and my sister was in LA.  My dad was home and I was able to get hold of him first.  We didn't have a long conversation:

Me: Are you watching?
Dad: Yes
Me: I love you, Old Man.
Dad: I love you too, Sweet Pea
Me: I'll talk to you later.
Dad: Be careful

That was it.  All we needed to say in 3 minutes.  Conversations with my mother and sister were very similar.

I spent the better part of the day over at my neighbor's house watching with her while we waited for the kids to get home from school.  Our conversation was mostly about how on earth we were going to explain this to them.  It was everywhere.  There was no way we could keep it from them.  How could we make sure they understood they were safe?  And were they really safe?  It was a horrible conversation to have with a 5 year old and a 7 year old.

Car Guy came home early so that he could be with me when they got home and we talked to The Boys about everything. We told them what happened and who was responsible. Number One Son over analyses everything. He always has.  He had so many questions about who and why.  I don't think he felt scared, he just wanted to understand and was very frustrated because none of it made sense to him. He was old enough to understand that if this could happen somewhere else, it could happen here.  I think that having us both there reassuring him is what let him sleep that night.  Number Two Son was different.

Number Two Son: Mommy, the people that did this, they're really bad people right?
Me:  Yes Baby they are.
Number Two Son:  Then God will take care of them.  Can I have a snack?

He was young enough that it was something that happened on TV and everything in his immediate world was normal, so he was fine.  We spent the remainder of the day together watching little TV until we put The Boys to bed.  For several nights after that, I had trouble sleeping and would get up at random times in the night to check on my children.

Fast forward to the 10 year anniversary and there are some similarities in that the events were all over the media. We didn't watch very much.  My boys couldn't understand why we didn't want to watch it and why we were so sensitive about it.  I tried to explain to them the difference in the perception of the event as it happened between adults and children. The boys still view at something a little distant.  Yes it happened, but their insular world was safe.  We, as adults, on the other hand were rocked to our very core.  Everything that we took for granted was question. I tried to explain to the boys that it wasn't about our safety, but it brought home the reality that we can only do so much to protect what is ours and there is so much that is out of our hands.  I told them we weren't watching because we didn't want to be reminded of how totally helpless and out of control we felt that day. 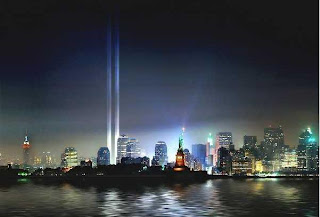 We will always remember the loss, the fear, the shock, helplessness and hopelessness from that day.  But we will also always remember that there were true examples of heroism and hope that day. And with all the sadness that was experienced, I 'd prefer to remember that I also saw the good in so many that rose to the occasion and surpassed it. They made me see what I kind of mother, wife and person I'd like to become.  I will also remember that with death comes rebirth and there was a new patriotism that was born that day and we all stood together. It was one of the worst days I've ever experienced, but it made me appreciate how fortunate I am and how much I have been blessed with.
Posted by Melissa at 4:17 PM