Do you ever have mornings where you just can't seem to get motivated regardless of how much coffee or tea you've had?  That's me, only it's been the whole blooming week. I would have never thought that driving seven hundred, thirty-six miles (that's right 736 miles) over the course of the weekend would wear me out, but oh my, it has flattened me. I am positively dragging.

I took Friday off and drove down to Greenville to pick up Number One Son and The Girlfriend.  We stopped at this little place that The Girlfriend knows about and had the most delicious and unusual cupcakes.  The place is called The Peppered Cupcake and that's what I had.  The actual cupcake is a regular cupcake but it has orange marmalade and horseradish inside with a lightly peppered icing.  OH MY GOODNESS!!!! It was flipping divine. Tabitha, the owner, specializes in unique cupcakes and she has perfected the art.  Number One Son likes the Maple Bacon cupcake.  I just have one problem with all this.  The cupcakes are amazing but if you're going to spend your day making all that decadent yumminess, please have the common decency to have a couple of extra pounds.  It's so unfair to walk in and see this trim, attractive woman making these fat filled items. Not an ounce of fat on her. It's a conspiracy I tell you!

Anyway, the weekend went by rather quickly.  Number One Son got his replacement retainers (ahem) and Number Two Son now has a mouth full of brackets and wires.  I don't think Number Two Son was very excited by the whole process...until he found out that since he's gotten his braces, he can whistle.  He's never been able to do so.  We were talking about it the other night because sometimes, when air passes over/through the wires, he can hear a faint whistle.  We started discussing how one actually does whistle and I recalled a friend in college who could only whistle when she had her braces.  He gave it a go and viola! I wish I had a camera at that moment.  The shock and happiness on his face reminded me that while he might be 17, he's still a kid at heart.

I also made a purchase Saturday.... 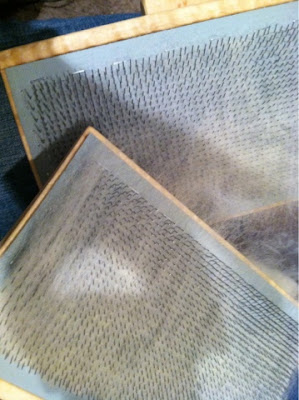 Do you know what it is? I'm going to wait and see if you can figure it out.  Just a little mystery in the day.  I'm sure there are several of you who will guess right away.

Sunday we got back in the car and took the kids back to Greenville, stopping on the way down to have lunch with Anne and her family.  I love spending time with these guys, I just hate that this trip was so rushed.  We will definitely have to plan something soon.

So there you have it.  Since all of this driving around the state, I have been pooped.  I get up in the morning, go to work, come home, fix dinner and crash....hard.  It's been really busy at work, so that means the days have been flying by.  I can't believe it's already Wednesday.  I'll try to take some pictures of my works in progress and let you know about them tomorrow. Now I have to be a responsible adult and work.  Have a good one!
Posted by Melissa at 9:28 AM