So you all know that Car Guy spent a couple of weeks in Chile.  He came back tired but very enthusiastic. He said that the area is beautiful and the people are friendly....I'll show you pictures in the next post.  This post is about the loot...some of it anyway. Just a few photos.  I'm afraid my model was studying for his AP American History test (yes, a test the second week of school!) and was unavailable. 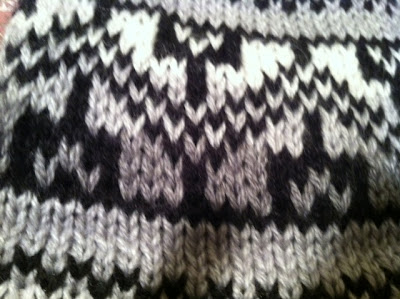 Can you say yummy, soft, and warm?  I'm afraid I can't tell you exactly what it is because Number One Son has not received his yet. I don't want to spoil the surprise because you know he checks my blog on a daily basis just to see what his crazy old mother is up to....NOT. But you see, I've been picking on him and told him he had to come home and visit his crazy old mother in order to get his gift - bribery, it's a wonderful thing.  AND I didn't tell him what the gift actually is.  I just told him it was from San Pedro, De Atacama....say it five times fast, just so I can giggle. Anyway, it's driving him nuts.  I don't know how to take pictures of our text conversations, but they are pretty funny.  You just get "the typed by me" version....

He also brought me back some yummy, soft, snugly, alpaca wonderfulness.... 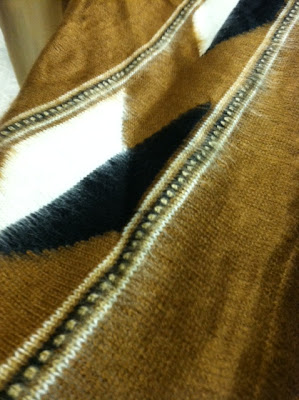 It looks a little abstract, but it is actually a wrap made with the softest of alpaca wool.  And it is warm!  I put it on in our lovely 90 degree weather....for about five seconds.  I didn't want to spontaneously combust and ruin it. I have a pretty good idea that once the weather starts cooling off, it will get a lot of use.

He also brought back a really neat hand crafted miniature of one of the buildings.  It's really cool and even has a working street light....and I forgot to take a picture of it.  I'll do that and show it with some of the pictures that Car Guy took.

On the knitting front, I've been experimenting.  Since I have total control of the TV right now, I've been in total girl bliss by watching Season Two of Downton Abby and knitting - yes, I'm a little behind.  I think I'm half in love with Mr. Bates....don't know why, but I am.  Here are a couple of pictures..of the knitting, not Mr. Bates: 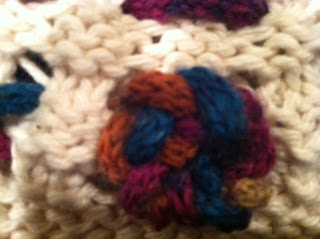 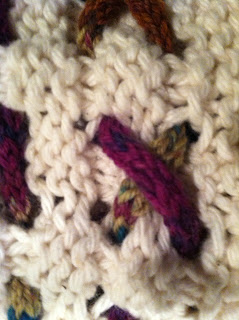 I'm not going to tell you what it is...I'll leave you with a little mystery.  Because I've been playing with this, I'd rather show you the finished product, once I've figured everything out. And maybe, by then, my model will be available...since he does such a fine job. Let me know what you think it is...
Posted by Melissa at 12:29 PM