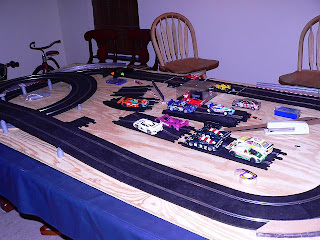 It is currently midnight, so I can wish everyone a happy Friday!  I should be in bed, but I wanted to stop by and say hello to everyone.  It looks like The Boys and Car Guy are finally healthy - YEA! Just in time for the Regional Wrestling Tournament this weekend.  While they were recuperating, they had to have something to amuse themselves, so they pulled out Car Guy's Scalextric Racetrack that I gave him for Christmas when The Boys were little. Car Guy bought a huge piece of plywood and put it on top of the pool table and he and The Boys set up the track.  All three boys had fun with it. 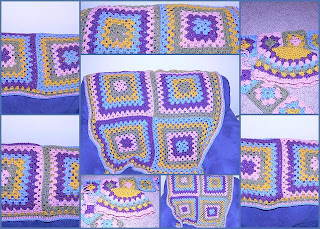 While everyone was sick, I had to do something to keep busy, so I did a lot of crocheting for the store.  I'm afraid that the picture color isn't great, but I made a granny square baby blanket, a little girl's hat and in the picture, you can see the beginnings of a scarf.  I finished the scarf up tonight.  The yarn is Vanna's Choice which is a soft acrylic.  It's much softer after it's been washed and the reason I use this yarn for the items I make for the store is that it is machine washable.  So many people don't want to have to take the time to hand wash items any more. 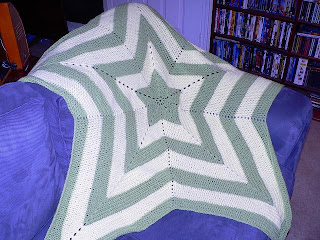 I also finished the star baby blanket. I think I'm going to have to make a bigger one with heavier yarn for Number Two Son.  He really liked this one.  Of course, since he's now almost six feet tall at the age of fifteen, it's going to have to be a lot bigger than this one. 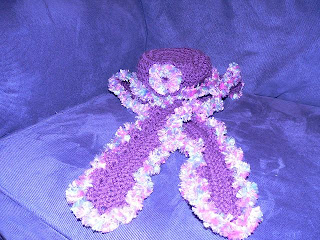 And finally, I made another little girl's hat and scarf.  (Again, I'm not crazy about the picture.) This one has fuzzy, fun yarn around the edge of the scarf and the brim of the hat. Very frilly.  I think that Car Guy and The Boys weren't feeling well because their masculine world had been invaded with pinks, purples and other frilly items while I was working on these projects. They just aren't used to a lot of froufrou in their lives.

So, between the sick men, work and hooking, I've managed to stay out of trouble....that just doesn't sound right.  Now I'm working on another hat...this time, for an adult.  We'll see how it turns out.

I'm off to bed now.  You probably won't hear much from me this weekend as I will be sitting in the bleachers at a high school yelling at my child to "Pin Him!!!!"  So I hope everyone is enjoys their weekend, takes good care of themselves and is sure to drink plenty of water (Denise)!!
Posted by Melissa at 12:39 AM