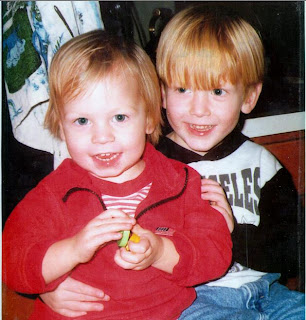 I'm very fortunate in that I have two amazing sons.  Seriously,  look at those faces! They are just too cute for words, if I do say so myself.  This is one of my favorite pictures of them.  It's so sweet and innocent.  This is back when they still liked each other.  Back before they learned how to aggravate the living daylights out of each other.  Then they grew up.  Now a civil conversation is a miracle.  Part of this is because they are brothers and there is only two years between them.  And part of it is because they are as different as night and day.

Number One Son takes after Car Guy, even though he denies it. He's crazy smart and doesn't realize it half the time. He also has the most amazing sarcastic sense of humor.  He over analyzes everything and worries way too much.  He'll be 17 next month and I fear that by the time he's 25 he'll have an ulcer because he keeps everything inside.  He's also a lot more sensitive than he lets on.  I do love him so.  I'm having lots of "Mommy Moments" where he's concerned because he's growing up so fast.  He's a junior in High School and will be leaving the nest soon.  That scares the living daylights out of me.  Have I done everything I'm supposed to?  Have I taught him how to be loving, caring, giving, confident and strong?  Have I taught him how to be a good man?  Will he go out and conquer the world?  Will I be there to catch him if or when he falls?  Will he want me to?  Watching him grow up is breaking my heart.
Number Two Son is my child.  He takes after his Momma, bless his heart﻿﻿.  He is a funny child. This picture was taken in Target and he was on a little tri-cycle.  He lives in his own world and always has. He doesn't worry too much about what other people think.  I worry about him too, but in a different way.  He'll probably get through life just fine, but I worry because he has no fear, which scares me.  He is very sweet natured, but don't push him.  He has a nasty temper.  But he is so funny.  Once, when he was about three, we were at a friend's house for dinner and he told our friend to sit next to him, because he, my son "knows stuff."  He also said, "I'll never get married cause I'm obnoxious." So I never know what's going to come out of his mouth....or his brother's for that matter.
Let me lay some background out there.  Both of my boys were conceived while I was on birth control. This is not a secret in our family. We were having breakfast the other morning and I don't remember how the subject came up, but here's the conversation:
Number One Son :  I'm Super Man
Me:  How's that?
Number One Son :  I'm the only sperm that got past the birth control.
Me: No you're not (pointing to Number Two Son)
Number One Son :  Oh....well he's not Super Man
Number Two Son ponders this for a few minutes then looked at me.

Number Two Son pops out with: Thanks for not aborting us Mom.
Me: WHAT?!?!
Number Two Son: We weren't planned, so it was an option you had.
Me:  No it wasn't.  Not for me.
Number Two Son:  Well, thanks for not doing it.
Wow. How else do your respond to that?  The fact that he even thought about that blows my mind.  But then there is the conversation tonight.  Again, let me give you some background.  I make my boys sandwiches to take for lunch.  One of their favorite sandwiches is the good old fashioned peanut butter and jelly.  Normally, I make this with grape jelly.  Well, I'm out of grape jelly so I made their sandwiches this morning with Brenda's homemade fig and strawberry jelly.  It's yummy.  It's just sooo yummy...I had to put that out there. So I pick them up from wrestling practice tonight and here's the conversation:

Number One Son:  Mom, that sandwich, man, that was a banging sandwich.
Me:  Good, I'm glad you liked it.
Number One Son: No Mom, you don't understand, that sandwich was like sex in a Ziploc bag.
Me:  Really?!  How would you know?!?!
Number One Son realizes what he just said and blushes a little bit while he laughs. He's embarrassed and now.....well now, I'm REALLY worried.
Posted by Melissa at 7:29 PM