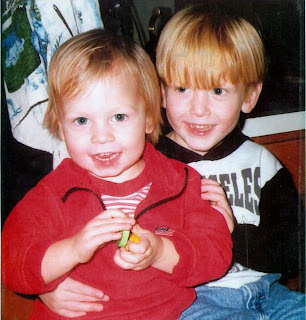 This is one of my favorite pictures of my boys.  It was taken a long time ago when they liked each other and would play sweetly together. Then something happened. The older one decided it would be fun to pester the little one...a lot. I mean A LOT, as in way too much. As in drive their mother insane. As they got older, it got worse.  It also became more physical. There were times that it got so bad that I would step in between the two of them and pray that neither one of them would swing.  That my presence was enough to calm them down. And thank goodness it worked.  I never got the accidental black eye by stepping into the path of flying adolescent fists...whew.  But it always really bothered me the way they only tolerated each other.  My sister is one of my best friends.  I love and miss her terribly, particularly since she lives on the other side of the country.  But those two, not so much.

Then the oldest went off to college.  The house got a lot quieter.  Some of the silence was good and some of it was not so good.  I have missed him, but I didn't miss the fighting and the snarky comments that the two would exchange.

While at school, the oldest started having girlfriend problems. You know, the usual...fighting, breaking up, getting back together. He found support in the most unlikely place - his little brother. Then my youngest recorded that song and posted it to youtube.  His brother saw it. And he posted it on his facebook page. And he tweeted it to all his friends and was proud of his little brother. And they started talking.  Not fighting, but really talking...or rather texting and tweeting. They found out that they had some things in common and that maybe they weren't as obnoxious as they thought they were. Then the oldest came home for spring break....and has been hanging out with his little brother. And instead of yelling, I hear laughter and a friendship emerging....like they might, dare I say it, like each other?!?!

Yes, there are some things in life that truly are stranger than fiction.  I know, I've seen it....and it makes me the happiest mama ever.