I hope every one's New Year started out beautifully!  I was able to spend mine with great friends and family, so I couldn't hope for anything better in the coming year.  As with everyone else, I've been doing a lot of reflecting on 2011 now that it's done and, as much as I hate to rush this life, I'm glad to say it's done....

Well crap! This was started early Tuesday morning.  I was optimistic and ready for the New Year.  I just knew that 2012 was going to be better. Then I went to take The Boys to wrestling practice and it rapidly went down hill.

I was driving down the highway and was pulled over by the county's finest.  The police officer informed me that the tag was expired on my car. I explained that the tag was expired because the car won't pass inspection because of a problem with the emission equipment. She told me to wait. She went back to her car and played on her computer and talked on her radio.  I called a friend that has a son on the wrestling team and she agreed to take The Boys to practice. As I was talking to my friend the officer came back to the car, asked me to get off of the phone and step out of the car.  I did as I was asked. Then I was asked to place my hand on the trunk of my car and she proceeded to handcuff me and tell me I was being taken down town.... 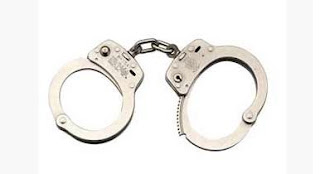 "No ma'am, there is a warrant for your arrest for failure to appear."

"A court appearance for a traffic violation."

At which point I was literally "cuffed and stuffed"  into the sheriff's car and taken downtown - Not one of my finer moments.  It was just adding insult to injury, as I was riding down the road behind the protective plexi glass barrier, to watch the officer type on her computer while going 60 mph.  Part of me felt like pulling a Barney Fife and shouting "citizens arrest!" because I know that can't be legal. 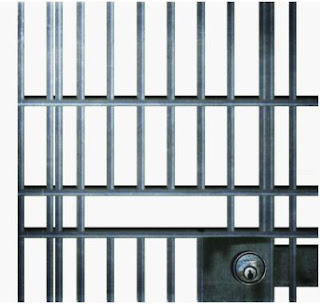 Anyway.....Once we got to the jail, she lightened up, removed the hand cuffs, gave me my phone and let me call Car Guy.  I guess she looked me up and realized that I have no record and am not a hardened criminal.  The warrant for my arrest was for a failure to appear for a speeding ticket in...wait for it.....2009.  So Car Guy had to come get me, pay bond and I had to promise to appear in court in February. I was not booked, finger printed, photographed or anything else, so I don't have a record.  I got to stay in the "holding" room the entire time I was there. The whole thing was a unique experience that I don't EVER want to have again. 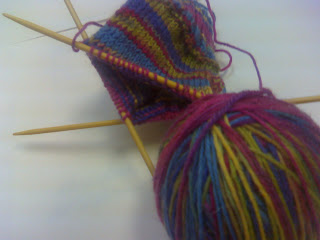 The really funny thing about all this was the look on the police officer's face when she gave me back my purse and I asked if it was alright if I knitted while I waited. "Ummm...OK."  So there I sat, in the cold concrete holding room of the jailhouse, knitting a sock on my dpn's. Periodically, she'd peek out there and just watch with a completely befuddled expression. Of course, I'm going to have to rip out the rows that I did because they are a complete mess and my tension was all over the place, but it did help calm me and that was worth it.

Car Guy picked me up and bundled me home all safe and sound.  My Boys aren't sure what to think of the whole experience, but I did learn a few things...

:: My husband is a wonderfully sweet man (I knew this already, it was just reinforced).  He wasn't mad at me because he had to leave work, pay money we really couldn't afford for a stupid, forgetful mistake on my part.  He just wanted to know why they had to put handcuffs on "possibly one of the sweetest women on the planet."  Bless him.

:: My Cheese Biscuits are the BEST. They laughed with me, offered support, hand holding, bail money and even said they'd go to court on my appointed day and sit in the front row and knit as a show of solidarity.  I LOVE these ladies.  They have enriched my life immensely.

:: A good sense of humor in a time of crisis is invaluable.

:: Home is possibly one of the most wonderful places to be after a bad day.

:: Things will look better from a distance...like the next day.