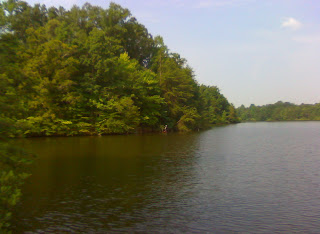 I hope everyone is having a wonderful week!  Things have been so busy!  This morning I took Number One Son to have his Senior Pictures taken. The picture to the right is one of the locations that they take the "nature" pictures.  This is one of those "Rites of Passage" things.  Next year is his last year in High School, then he'll be off to college. So before Graduation, there will be pictures taken, special banquets, etc.  All to remind me that one of my babies is leaving the nest..sniff, sniff.  I can't believe how quickly the time flies.  My baby is a young man now!

Number Two Son made it home safely from Tulsa.  He had a wonderful time with his Aunt, Uncle and cousins.  I spoke to him twice while he was gone, so obviously I missed him a bit more than he missed me. At least he remembered to call his dad on Father's Day.  I'm sure I have to thank his Aunt for that phone call! 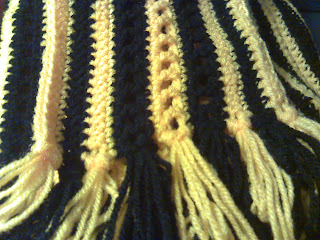 I have two Ta Da moments today.  The first is a scarf that I made for a friend's daughter that I've had the joy of watching grow up into a beautiful young lady.  She will be attending Appalachian State University in the mountains of North Carolina next year.  Since it gets rather cold in the mountains, I crocheted her a scarf in the school's colors of gold and black.  She will be getting a hat as well.  I'm feeling rather brave these days, so I decided that I will knit her a hat...in the round...I haven't started it yet, so we'll see if I can get it completed before school starts in August. Hopefully it will go much quicker than socks. 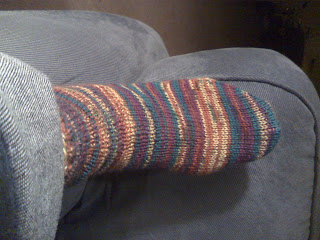 Ta Da!!! It's a completed sock!!!  I can't tell you how excited I am by this! I had to watch the video several times in order to complete the kitchener's stitch, but it's done and I absolutely LOVE it! 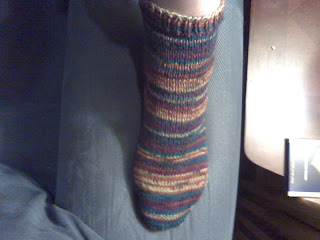 Here's another picture so that you can see the ribbing around the top. I've already started the mate and I've noticed that they aren't going to match perfectly, but that doesn't really bother me because I think they will perfect in their imperfection.  I recently read in a knitting book somewhere that hand knitted socks are like lingerie -  no one knows that you're wearing them, but they make you feel special.  Isn't that brilliant?  I wish I could remember who said that because they so deserve the credit for their intelligence.

Well, lunch break is almost over.  I'll try to pop in later this week to update everyone on all the knitting drama.  As always, I greatly appreciate the emails and comments.  You guys are the best at encouraging me.  If it weren't for you and my Yarn Girls (Hey Ladies!!) I don't know if I'd have finished one sock, much less attempted anything else without all your warm thoughts.  Just imagine what a sad picture it would be of circular needles and DPNs crammed into a dark corner with neglected sock yarn, looking lost and forlorn.  That would have been their lot in life without your encouragement, so I'm sure they are thanking you as well :)  Have a WONDERFUL day!!
Posted by Melissa at 2:16 PM