Happy Monday Everyone!  I hope you all had a wonderful week-end.  I know I did.

It started out Friday evening by sitting in the bleachers at the High School to watch Number One Son play in the LaCrosse Game. Number Two Son was at a sleep over and missed out while My Sainted Mother, Car Guy and I froze our buns off.  It was freezing!  On top of that, I don't know anything about LaCrosse other than they throw the ball with these funny sticks with nets on the ends and they want to throw the ball into the goal at the other end of the field...that is my very simple view of the game. So you can imagine my surprise when I hear one mother complain that the other team's player had "penetrated the crease." What?!?! I found out that the crease was the circle that surrounds the goal and no one is allowed in the crease other than the goalie.  Whew! Glad we cleared that up!

Saturday morning looked kind of gloomy, but was a wonderful day.  It started with me "getting my knit on" by meeting a new friend at Panera Bread, which is coffee shop/cafe.  I met Dawn at 9:00 am and we spent a couple of hours getting to know each other and teaching me some basic knitting stuff.  Dawn came in wearing the GREATEST tie died jeans. OH how I wish I'd had my camera and had taken a picture.  They were so fabulous! Dawn is an incredibly talented lady and I so enjoyed spending time with her.  You can check her out here.  She does beautiful work and her little snow people are too cute for words as you can see from the picture I pirated from her blog.  (I don't know all the legal jargon, but that picture is the property of Dawn's, is her creation and I am in no way claiming it as my own.  I think that covers it because I ain't no thief.

After a morning of knitting, I rushed over to the craft store to get more yarn and some circular needles.  We'll see what kind of damage I can do with those after I finish my sweater.  Speaking of my sweater, I've been working on my knitting and I've just about completed the back.  Not too shabby if I do say so myself! (I will post pictures as soon as I take some!) One thing I did learn this weekend is that I knit like a lefty and since I'm self taught, for the most part, I thought that was pretty funny. Since I've only ever knitted two scarves I don't know if this will cause problems with patterns or not.  I guess we'll find out soon enough.

Saturday afternoon, Car Guy, Number One Son and I went over to my friend Sue's house so that Car Guy could help them try to fix a problem with their son's car.  We had a wonderful lunch of Tortilla soup.  I've never had it before, but it was YUMMY!  Some chicken, peppers, avocados, tomatoes, lots of spices all served over tortilla chips and cheese. It was a wonderful treat.


Saturday night we went to our friends' house for going away party for their son, who left this morning for Texas for Air Force basic training.  I know it's a bitter sweet moment for them as they are very proud of their son, but will miss him terribly. We wish him the best of luck 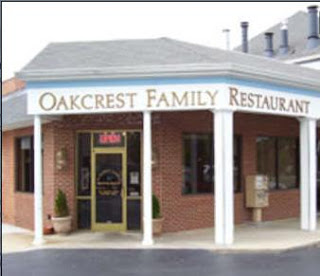 Sunday morning we woke to pouring rain and flash flood warnings in the low lying areas.  We got dressed and the whole family went to the Oakcrest Family Restaurant for brunch. After brunch, we went home, I got my  list together and headed to the grocery.  I have to say that grocery shopping on a rainy day is no fun.  But I got all my shopping done, went home, made some home made, baked macaroni and cheese...Yum!  It's the perfect meal on a yucky day. Then we settled in to watch The Real Housewives of Orange County marathon that led up to the season premier.  I swear, that show is like watching a train wreck. You just can't turn away.  I have to admit that after watching all that drama, I feel pretty good about my life, my friends and family! At last check, I don't think I have a knife protruding out of my back but I have a pretty good idea that those ladies would cram one in rather quickly if it would benefit them in some way! With friend like that, who needs enemies!

Well, that was my weekend.  I hope everyone has a wonderful Monday!  I'm off to see what you've all been up to!
Posted by Melissa at 11:22 AM