I haven't posted much yarn goodness here lately. What with the Christmas knitting/crocheting, I had to be careful.  I never know when the stray family member might pop in here to see what was going on. But that's done with for the year, so here we go....get ready for some really crappy pics :)  We had some rain this weekend so.... 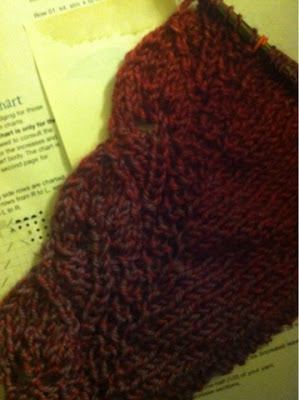 The pattern is Saroyan by Liz Abinante.  It's a freebie on Ravelry.  The yarn is JoJoLand Fantasia in the Blooming Garden colorway. 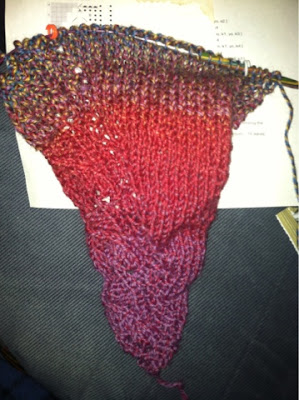 Can I just say that this yarn is GORGEOUS! 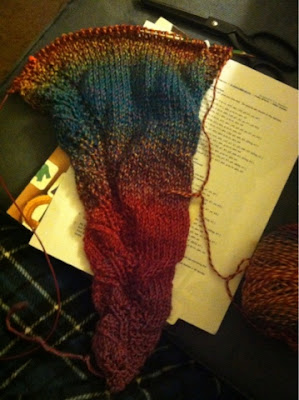 I bought it a couple of years ago at TNNA.  Dawn and I both saw it, gasped and bought it so fast it was crazy.  It's 100% Wool Superwash and it's super soft and springy. 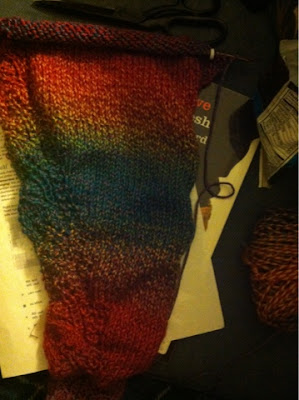 I'm halfway through and this knits up beautifully and quickly.  I know I'm late to the game and tons of people have already knitted this one up and I know why. This pattern is a dream.  It's one of those patterns that looks so impressive but is really quite easy as long as you pay attention to what row you are on. However, I do believe that blocking that leaf boarder might be a bit tricky.  We'll see.

As you've probably guessed, this is what I worked on this weekend.  We had a quite one. Watched some movies, though nothing spectacular.  I recorded Downton Abby and hope to watch it tonight.  I wanted to watch the Golden Globes and I have to say that I was so totally impressed by Jodie Foster.  What a class act! I also think that Tina Fey and Amy Poehler did a great job.  They were funny without being too insulting. Other than that, I pretty much just puttered around the house and complained about my winter disappearing.  Seventy degree weather in January?  Really?  I know that it will get cold again but this kind of weather always throws me for a loop.

Number Two Son starts exams this week so things will continue to be quiet around our house.  Hopefully, Number One Son will be making a trip home this weekend.  We'll see.

Hope everyone is doing well and enjoyed their weekend!
Posted by Melissa at 12:07 PM