For the most part. I can honestly say that I hope nobody gets this bug I had.  It's miserable. It affects EVERYTHING...your stomach, your head, your sinuses.  Ugh.  A co-worker said that she didn't think I've been this sick in the seven years I've been here.  I think she's right.

I went back to work yesterday. And came home exhausted.  I mean seriously tired, as in crashing hard tired.  My mother in law showed up with chicken soup and cornbread...God love her!  We ate, I sat down on the sofa and promptly fell asleep.  Woke up a bit later and went to bed.  The worst part is that I woke up this morning tired. I wish I still bounced back like I did when I was younger.

Obviously, not a lot was happening while I felt like I was close to death was sick. Here's a picture of the start of a hat for Car Guy. 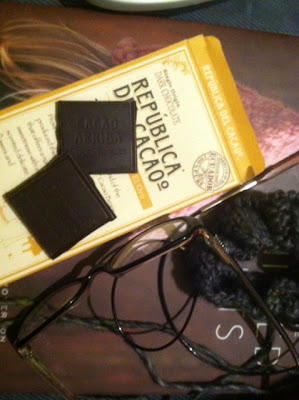 Just a simple ribbed hat in some scrummy Berroco Loft. Please ignore the glasses that made it into the picture (I don't know who's those belong to...ahem) and notice the gratuitous chocolate shot.  That is the chocolate that Car Guy brought back from Ecuador - delicious stuff.  I think it's deserving of a hat, don't you? Confession time - I've finished the hat and just haven't gotten around to taking a picture.  I mean that requires getting the camera and then forcing Car Guy to model for me. And in all honesty, I just don't have the energy right now.  How pathetic is that?

You know what else is pathetic?  I still haven't showed you SAFF pictures.  I'm feeling very lazy right now. Hopefully I'll get over it soon.  Like tomorrow.  I have to get up at the crack of dawn and get Car Guy to the airport by 6:00 AM for his flight to Bogota, Columbia. Hmmm....maybe a nap is in my future.  You thing anyone would notice?
Posted by Melissa at 1:02 PM