That would be me...I have good intentions, I really do.  I also have all kinds of excuses but it all just boils down to life.  We seem to be constantly on the go.  I'm not complaining, but I'd love to be able to come up for air before school starts on the 25th! Where did the summer go? 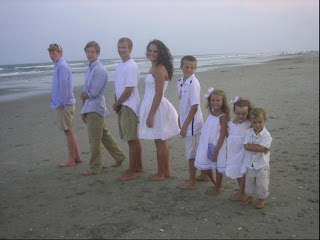 I know that part of this group will be wondering the same thing.  That funny looking group over there are all the kids...minus one who's still in it's mommy's tummy...He/She will be here late October, early November...NOT me, Aunt Wendy, thank goodness!  This was taken while we were on vacation and every time I look at it I get a little nostalgic because I remember when the "big kids" were babies. Number One Son will be a SENIOR in high school....What?!?! I remember when he was the only little one in the family. 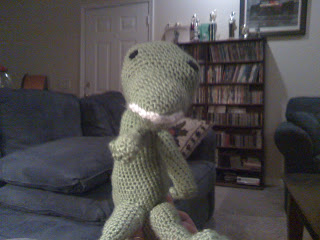 Speaking of little ones.  That little one on the end had a birthday recently and turned three.  He's a "big boy" now...His words :)  So I tried to make him something that a big boy would like....and that would be Rex.  At least that's what I was calling him while I was making him.  The "Big Boy" opened his present, promptly shook Rex in my face and yelled "ROOOAAAR!"  at the top of lungs and then took off running. Somewhere along the way, he tossed him at his sister...or to her, we couldn't tell...and started dancing around like three year olds dance.  He informed me that Rex was not the dinosaur's name and that he was Jacob...after his best friend.  I'm thinking that might be high praise, but I'm not sure because I don't speak "three year old" as well as I used to.  I'm a little out of practice. 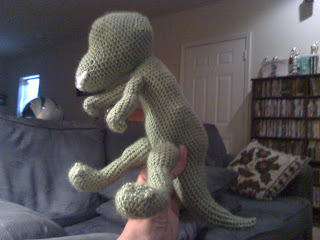 Here's another shot of Rex...I mean Jacob...so that you can see he came complete with tail.  I've never done this type of crochet.  I think he's really cute but the little guy was crocheted completely in single crochet and seemed to take FOREVER.  I know that he didn't but I don't know how much more of this I will be doing because there is actually A LOT of counting stitches and it can get rather tedious.  And for crying out loud, don't talk to me while I'm doing it or I'll lose my count - Argh!  We'll see.  My nieces thought Rex Jacob was pretty cool, so I might have to make them a little something similar.

Well, I hope everyone has a wonderful weekend.  My sister-in-law and her kids are coming to visit this weekend (the three kids right after my boys in the picture) so I'm sure we'll be busy as usual.  I'll get to get some girl time in with Gina and my niece, so I'm really looking forward to it.  Hope you all have a wonderful weekend and I'll have August's Show & Tell for you next week.
Posted by Melissa at 9:56 AM