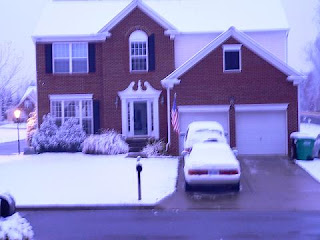 Hello All!!  I hope you all had a wonderful weekend! As you can see, we did get that snow on Saturday.  It was so pretty and gone by Sunday.  I have to apologize for the blurry picture, but it was so cold that my hands were shaking...that's my story and I'm sticking to it!  Also, you may notice that we're missing a couple of shutters.  We had a storm last week with really strong winds.  They were so strong that the shutters ended up in the yard.  They are now in the garage, waiting on the purchase of the clips to reattach them.

A million years ago (according to my boys) when I was in high school, Mike Raybon was our wrestling coach and Kathy Dick was our wrestlette advisor. Those of you who have never been involved in wrestling are probably wondering what a wrestlette is.  No, wrestlettes are not female wrestlers, they are score keepers, statisticians, clock workers, runners, etc. I was a wrestlette my sophomore, junior and senior years in High School.  I developed a very healthy respect for the sport and for Coach and Kathy. Coach was awarded the Wrestling Coach of the Year Award while I was in high school and he retired in 1984 with a 216-45-2 record that included 14 conference championships and 3 state championships. He was inducted into the National Wrestling Hall of Fame in 1997 and is also in the North Carolina High School Athletic Association Hall of Fame and Guilford County Sports Hall of Fame.  Kathy was also a guidance counselor and was a rock for me during those awkward high school years.  She helped teach us the importance of hard work and a job well done.  She is the only woman to be inducted into the National Wrestling Hall of Fame. As you can see, they've had amazing careers and continue to be very involved with wrestling even though they've both retired.  I love these tournaments because it gives me a chance to see these two wonderful people. 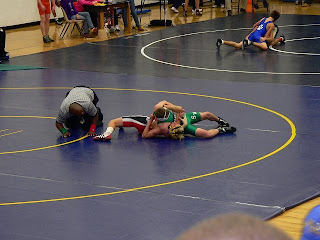 Here is Number Two Son.  He wrestled in the Kathy Dick Invitational.  He won his first round with a pin! He lost his second round and was very upset because we all thought he had his opponent pinned......doesn't that look like a pin to you?  Evidently it wasn't and he was pinned in the next period.  He went to the consolation round and lost by points. This was his first tournament and I was so very proud of him because he did his best and worked really hard.

Number One Son wrestled in the Mike Raybon Invitational.  He also won his first round with a pin.  He lost his second round, so he went to consolations and a chance for third place.  He wasn't too happy about this, but he brushed it off and ate a biscuit and drank some Gatorade.  Then he was up for his third match....while is brother is wrestling on another mat.....ARGH!!! I looked like a crazy woman who couldn't decide which direction to go in.  Number One Son wrestled his little heart out and........ 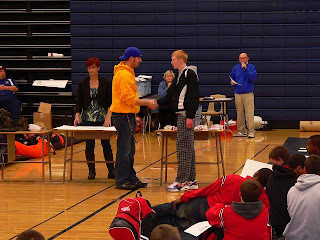 CAME IN THIRD FOR HIS WEIGHT CLASS FOR THE WHOLE TOURNAMENT!!!!!  Woohoo!  He wants to make it to States this year and if he keeps this up, I think he'll do it. Can you tell how disgustingly proud I am of these two boys?

Sunday, we went to the Christmas Parade for my home town.  I forgot my camera, so there are no pictures of marching bands, girl scout troops or Santa. It's probably just as well as it was freezing cold and all the pictures would probably have been blurry. 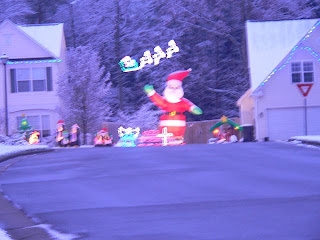 I didn't get a lot of crocheting done this weekend.  I took it with me to the wrestling tournament, but with two boys wrestling, I didn't do anything but make a mess. So I'll leave you with one more blurry Chirstmassy Picture...Here are the neighbors' decorations up the street.  Makes me think of the Griswold's from the movie "Christmas Vacation."  You can never have too many lights.....which is really sad, since I haven't gotten my outdoor decorations up yet.
Posted by Melissa at 12:11 PM