Sometimes it's just good to run away from everything and recharge. The Hubs and I have been feeling a little stressed, so off we went down to Oak Island and a little time at the beach.

Near Oak Island is the lovely little historic town of Southport, which was having their Fourth Annual Wooden Boat Show.  We spent the day there looking at the gorgeous old boats and site seeing.  Maybe you recognize this house (currently getting scraped and sanded to be repainted)... 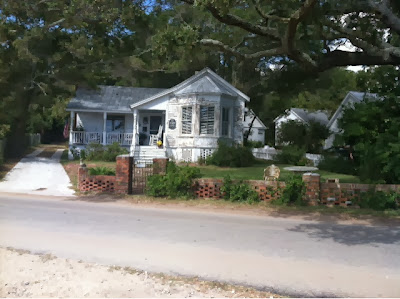 Did you ever see the movie Safe Haven?  It's base on a book of the same name by Nicholas Sparks, starring Julianne Hough and Josh Duhamel.  This movie was filmed in Southport and this is the house that Josh Duhamel's character Alex lived in.

Southport is a small town located at the mouth of the Cape Fear River and is obviously very picturesque. It's really becoming quite popular with the tourist. And that Fourth of July celebration they have in the movie....yeah, it really happens. 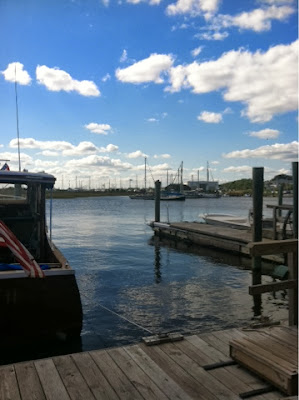 There are tons of great restaurants...The Pharmacy, Ports of Call, Old American Fish Company (which was the restaurant Ivan's in the movie), and Fishy, Fishy  - where I had one of the best Bloody Marys...other than the ones my sister makes. 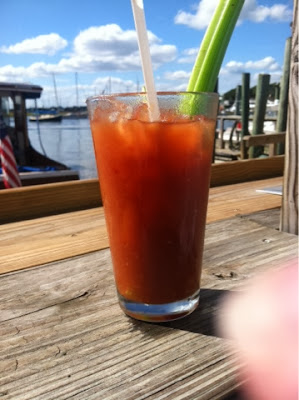 We ate dinner at The Frying Pan and this was our spectacular view. 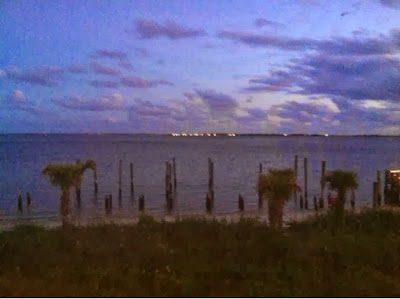 This restaurant is fairly new - it opened in 2012 - but the food was delicious.  I had shrimp and grits, which I can recommend...as well as the crab cakes. And any place that has "Fried with Pride" as the slogan on the back of their shirts can't be too bad.


But the best part of all was the company.
We had a wonderful weekend, made lots of great memories and recharged enough to face the week. That's a pretty good deal if you ask me. Hope all is well with you!
Posted by Melissa at 10:20 AM